The concept of pod irrigation began back in the mid-'90s on the South Island of New Zealand.  Dairy farmer John Kirk and RX Plastics in Ashburton New Zealand combined to create this new and innovative irrigation system that was eventually called K-Line Irrigation.  K-Line Irrigation's lower cost and simplicity helped it to catch on quickly with the New Zealand graziers.

They soon realized that K-Line could be adapted to almost any shape and size of field without costly changes in fencing, shade trees, buildings, etc, and was also easy and quick to install.

The slow absorption method that comes from smaller sprinklers irrigating over a longer period resulted in greater forage growth with virtually no runoff. This contributed to either considerable water savings or more forage with the same amount of water. 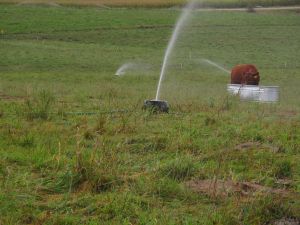 K-Line has become the most popular irrigation system in New Zealand with over 200,000 acres being watered. Australia and other parts of the world are experiencing similar results and growth with K-Line Irrigation.

K-Line Irrigation's lower cost and simplicity helped it to catch on quickly with the New Zealand graziers.

K-Line Irrigation was introduced to the U.S., Canada, and Mexico when K-Line North America was established in June of 2003.

K-Line Irrigation is sold through a system of established irrigation dealers that specialize in the installation and support of pastureland products. K-Line is proud to sell an environmentally friendly product, has a long track record of trouble-free operation, conserves our valuable natural resources of water and energy, and is a simple, long-lasting irrigation system.